How Tesla’s Electric Semi is Affecting the Industry

You know Tesla as the sleek electric cars you see zipping around on the freeways. You know they’re state of the art, all-electric, and sometimes have doors that open upwards – falcon-wing doors. What you probably don’t think of when you think of Tesla is electric semi trucks. But Tesla has indeed rolled out all-electric semi-trucks. Maybe it shouldn’t seem surprising, what with their innovative products like desktop superchargers, plans for underground tunnels, and of course, their cars.

Walmart has already placed orders for the all-electric semi trucks, and plans on purchasing more once they become more readily available.

They’re Not the Only  Electric Semi Trucks in the Market

While it seems like something that only Tesla might think of, what with their reputation for forward-thinking and cutting-edge technology, they have competition. The eCascadia is also a fully electric semi-truck that boasts 730-horsepower and a battery pack that lasts for 250 miles. That battery pack can charge in ninety minutes up to 8 percent of the battery’s capacity.

The eM2 106 is another contender, and it’s for local delivery and distribution only. This semi-truck has 480 horsepower, and it can go up to 230 miles before it needs to be recharged.

The Tesla electric semi truck can travel anywhere from 300 to 500 miles on a single charge. It can also go from zero to sixty in twenty seconds.

It has four motors independent of each other to give it traction when traveling on inclines or declines. Along with that reliability, it was built with a low center of gravity to help with rollover protection. 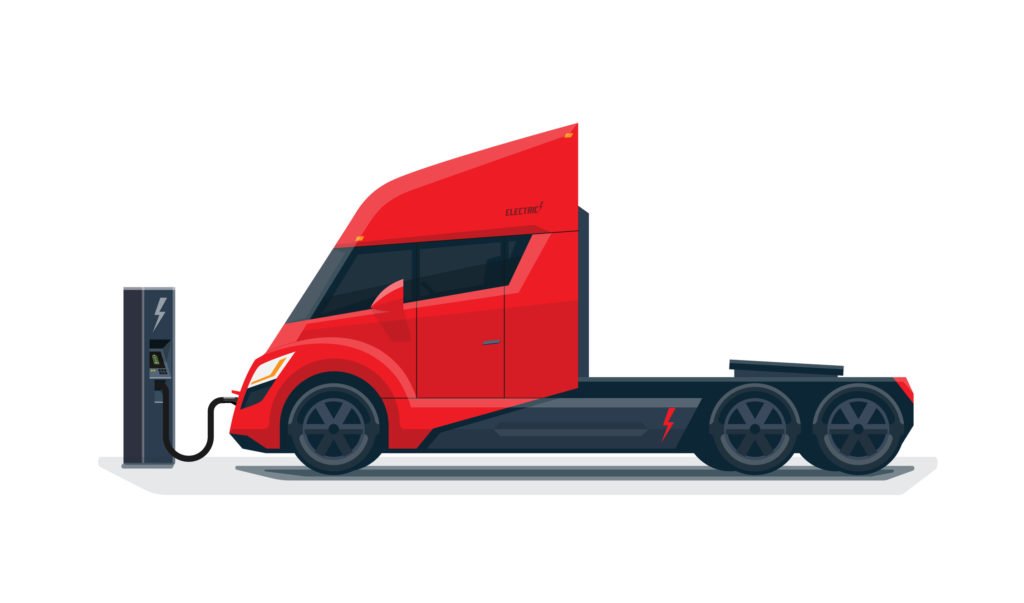 It also comes equipped with autopilot, which is intended to assist the driver in their duties. The driver must still remain alert, but the electric semi is indeed capable of driving itself. It’s projected that this truck will bring a $200,000 savings throughout its lifetime, and that will pay for itself in two years because it reportedly will not need as much maintenance as previous vehicles because they have fewer moving parts.

The driver position is centered which Tesla says will help provide more control and visibility through the vehicle.

One downside that fleet owners who are considering purchasing electric semi-trucks have to think of is that the trucks require charging stations. These would have to be installed in their facilities and

charging would have to be taken into consideration along routes.

The Future of Trucks?

Autonomous trucking is sneaking up on us sooner than we think. By 2020, Tesla will begin major production on its electric semi trucks. Not only is Tesla projected to have its cars up and running by this time, but other companies like Volvo and eCascadia are going to be competing in this space as well.

Two Tesla trucks are already up and running through the United States, driving themselves and only needing assistance when they come to a charging station. Elon Musk says that he soon expects the trucks to have a 600-mile range, so in the years to come that range can be expected to increase even more.

They also help remove noise pollution. Truck traffic can produce sounds up to 100 dBa. It only takes 85 decibels to cause hearing loss. Electric trucks promise to put an end to noisy trucks.

Do you need a new truck to add to your fleet? TopMark Funding can give you the funding you need to help your business grow. Stay up to date on an ever-changing industry by trusting yourself to professionals who know the field inside and out.