Alphabet Inc., known primarily for their Google search engine and YouTube video platform, has a subsidiary known as Waymo. Waymo has two wings, Waymo One for typical four-wheel driving of passenger vehicles, and Waymo Via, where they are testing the technology in 18-wheelers for long distance deliveries.

Waymo is still a far way away from making Via viable, and part of that is required extensive testing on the road. Waymo hopes to take another step by expanding their driving testing to Texas. 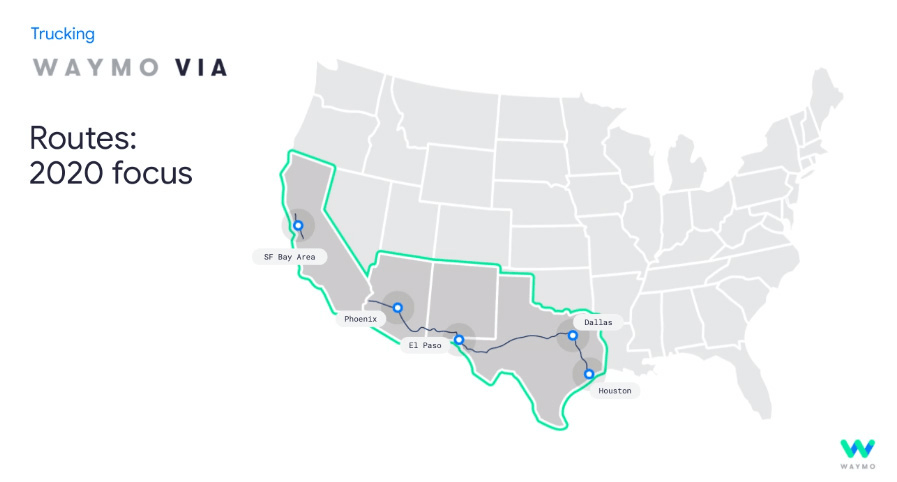 Previously, Waymo’s testing operations occurred primarily in the Bay Area in California, within close driving distance of Google Headquarters. Before the expansion into Texas, Waymo has conducted 20 million real miles, plus 15 billion miles in simulations. The value of those simulated miles compared to the real miles, where lives and property are constantly at risk, is left to the reader.

Texas is an optimal place to start expanding away from the home of Silicon Valley. Touching the Atlantic via the Gulf of Mexico and touching Mexico itself, the state is a massive shipping hub for many different types of goods and supplies.

The current plans are to have Peterbilt 579s drive either from Dallas to El Paso by way of I-10 and I-20, or from Dallas to Houston by way of I-45. The trucks will first travel the route manually by a human driver, then when the machine learns the route, will take over with a driver in the front seat to operate in case of unforeseen road events.

Waymo hopes to eventually eliminate the human element altogether, seeing them as a necessary evil while the kinks of the technology are ironed out. Vijaysai Patnaik of Waymo said in a June media call that “[their] goal really is to improve the safety on the road by making every mile traveled with Waymo Driver safer, because it doesn’t get tired or distracted.”

Ultimately, Waymo believes it is doing a benefit for the United States economy. “We are trying to enable this thriving industry with the Waymo Driver, not disrupt it,” a spokesperson wrote in an email. “We believe our technology can help alleviate the strain on the industry that exists today due to the rising driver shortage and the challenges that come with trying to recruit and retain drivers.”

Waymo currently has no comment on a timeline for fully automated trucks hitting the market, where a driver, if there is one at all, can sleep and watch television as the truck travels along the road to fulfill  a delivery contract.

“The complexity and difficulty of actually getting to a point where you can move from a reliable demo with a safety driver to actually having the confidence to pull the safety driver out of the seat and take real customers and goods on public roads in fully autonomous mode,” Boris Sofman, Director of Engineering at Waymo said, “that complexity was way bigger than anybody expected.”

Most interesting of all, however, will be how modern day truckers view these new machines. One out of every sixteen residents in Texas works in the trucking industry, and if Waymo views them as inferior to technology, Waymo might receive some pushback from truckers who do not want their way of life replaced.

At the same time, it is possible that truckers will embrace the technology, seeing it as an extension of their careers that will make the work easier. For those people, Waymo is hiring drivers through Transdev. For the time being however, trucking will not be going away anytime soon. Waymo is a pioneer in the autonomous Class 8 vehicle race, and even they are unsure of when the technology will be ready for public use.

What are your thoughts? Are autonomous big rigs the future, or the very far future? Should drivers be worried about machines replacing them? Leave a comment below and let us know what you think about the future of the trucking industry.

TopMark Funding is a top-rated semi-truck financing and equipment financing company located in Roseville, CA. We specialize in commercial trucking and heavy equipment. Our mission is to become your long-term financial partner by helping you grow your trucking business and fleet.

We are experts at placing customers into quality programs while maintaining their credit and their ability to buy. We are a competitive solution for top tier credit customers and understand the credit road map related to maximizing a customer’s ultimate purchasing power.