Ever wonder what the longest highways in the United States are? We put together a list of the 10 longest highway & interstates in America based on miles covered.

As a trucker driver that spends countless hours hauling freight and goods all over the nation, you’ll probably be very familiar with these historic highways. Heck, you may even be driving on one of these highways right now or in the near future. We ranked the longest highways from 10 to 1. 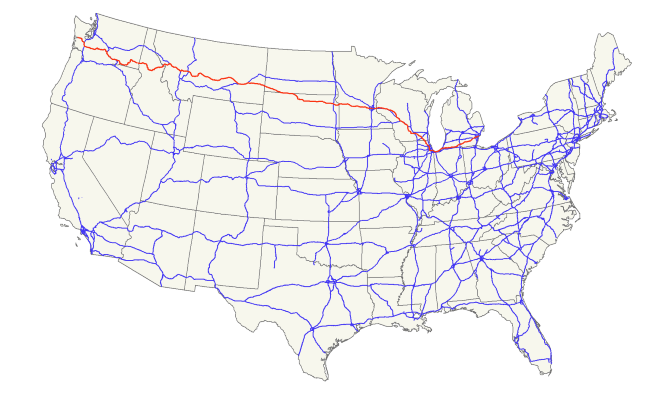 The highway has mostly been superseded by Interstate 90 and I-94 but remains an important link for local and regional destinations. 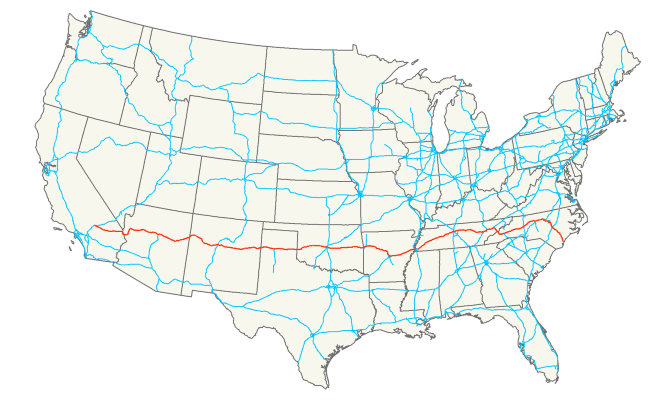 Interstate 40 aka I-40 started it’s existence in 1957 to present day. The total length of 2,555 miles. A major east to west Interstate Highway running through the south-central portion of the United States generally north of I-10, I-20 and I-30 but south of I-70.

The western end is at I-15 in Barstow, CA. I-40’s eastern end is at a concurrency of U.S. Route 117 and North Carolina Highway 132 in Wilmington, NC. Much of the western part of I-40, from Oklahoma City to Barstow parallels or overlays the historic US 66. I-40 runs through or near many major cities including Albuquerque, NM; Amarillo, Texas; Oklahoma City, OK; Little Rock, Arkansas; Memphis, Nashville, Knoxville, Tennessee; Greensboro and Raleigh, North Carolina. 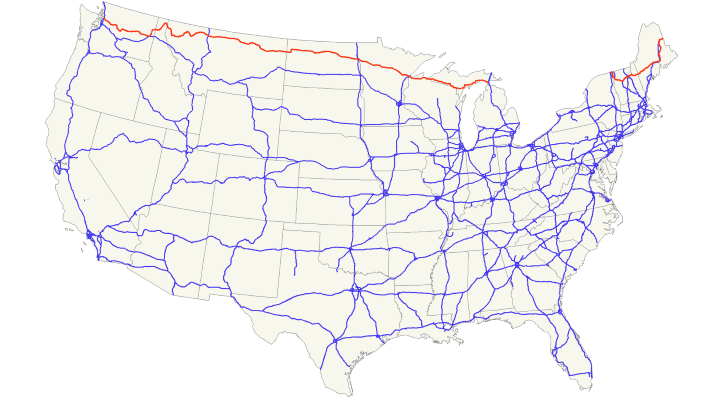 U.S. Route 2 or U.S. Highway 2 or US 2 is an east to west U.S. Highway spanning 2,571 miles (4,138 km) across the northern continental United States. US 2 has been in existence since November 11, 1926. US 2 consists of two segments connected by various roadways in southern Canada. Unlike some routes, which are disconnected into segments because of encroaching Interstate Highways, the two portions of US 2 were designed to be separate in the original 1926 highway plan. 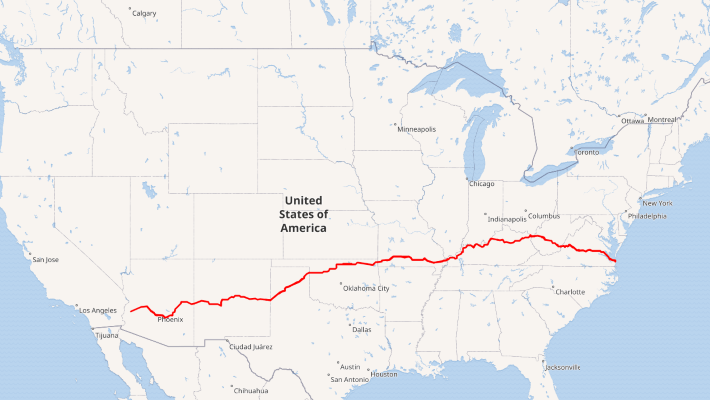 Coming at #7 longest high in the USA is U.S. Route 60 or U.S. Measuring in at 2,655 miles in length. Highway 60 or US 60 is a major east to west US highway, from southwestern Arizona to the Atlantic coast in Virginia.

The highway’s eastern terminus is in Virginia Beach, Virginia, where it is known as Pacific Avenue, in the city’s Oceanfront resort district at the intersection of 5th Street and Winston-Salem Avenue. Its original western terminus was in Springfield, Missouri; it was then extended to Los Angeles, California; but in 1964 it was truncated to end southwest of Brenda, Arizona at an interchange with Interstate 10 (I-10) after the US 60 highway designation was removed from California. 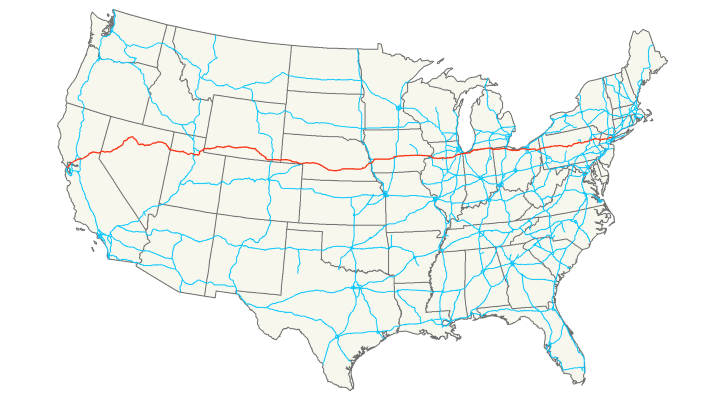 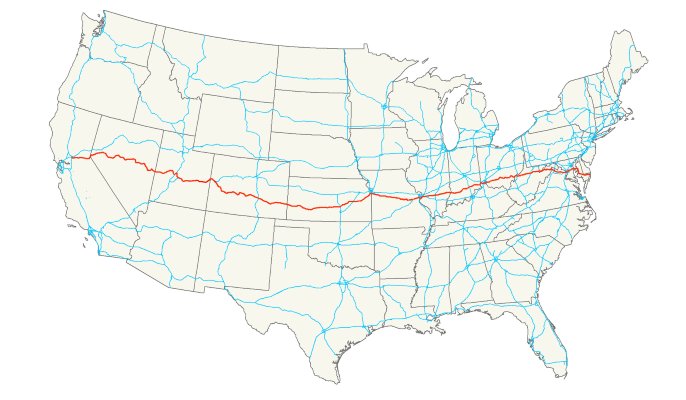 Until 1972, when it was replaced by Interstate Highways west of the Sacramento area, it extended (by way of Stockton, the Altamont Pass, and the Bay Bridge) to San Francisco, near the Pacific Ocean.

The Interstates were constructed later and are mostly separate from this route. It generally serves a corridor south of I-70 and I-80 and north of I-64 and I-40. The route runs through the mostly rural desert and mountains in the western United States, with the section through Nevada known as “The Loneliest Road in America”. 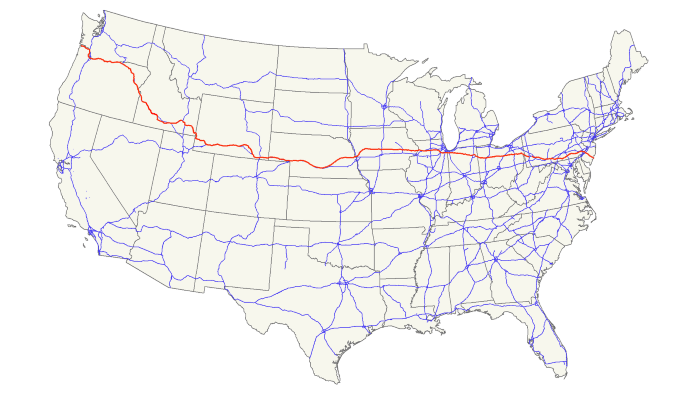 U.S. Route 30 or U.S. Highway 30 is an east-west main route in the system of the United States Numbered Highways, with the highway traveling across the northern tier of the country.

With a length of 3,073 miles (4,946 km), it is the third-longest U.S. highway, after U.S. Route 20 and U.S. Route 6. The western end of the highway is at US 101 in Astoria, Oregon; the eastern end is at Virginia Avenue, Absecon Boulevard, and Adriatic Avenue in Atlantic City, New Jersey. Despite long stretches of parallel and concurrent Interstate Highways, it has not been decommissioned unlike other long haul routes such as U.S. Route 66.

The “0” as the last number in the digit indicates that it is a coast-to-coast route and a major east-west route. Much of the historic Lincoln Highway, the first road across America (from New York City to San Francisco), became part of US 30; it is still known by that name in many areas. 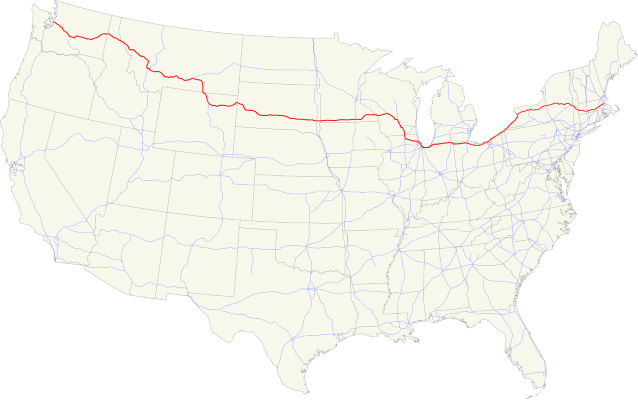 Interstate 90 also known as I-90 is an east-west transcontinental freeway and the longest Interstate Highway in the United States at 3,020 miles. Its western terminus is in Seattle, at State Route 519 near T-Mobile Park and CenturyLink Field, and its eastern terminus is in Boston, at Route 1A near Logan International Airport.

The western portion of I-90 crosses the Continental Divide over Homestake Pass just east of Butte, Montana, connecting to several major cities. 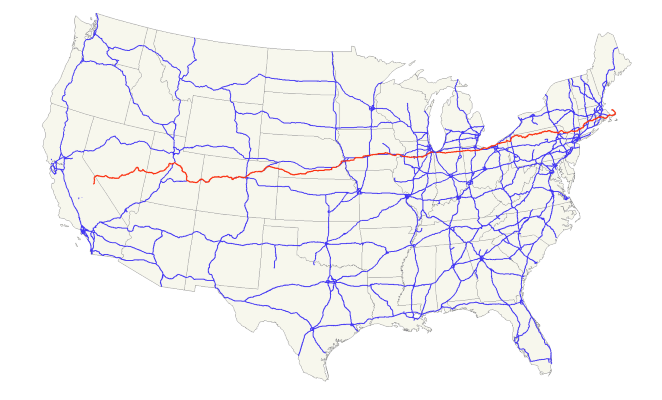 U.S. Route 6 aka US 6, also called the Grand Army of the Republic Highway, honoring the American Civil War veterans association, is a main route of the U.S. Highway system. While it currently runs east-northeast from Bishop, California to Provincetown, Massachusetts, the route has been modified several times. The current length is 3,198 miles.

The highway’s longest-lasting routing, from 1936 to 1964, had its western terminus at Long Beach, California. During this time, US 6 was the longest highway in the country.

In 1964, the state of California renumbered its highways, and most of the route within California was transferred to other highways. This dropped the highway’s length below that of US 20. 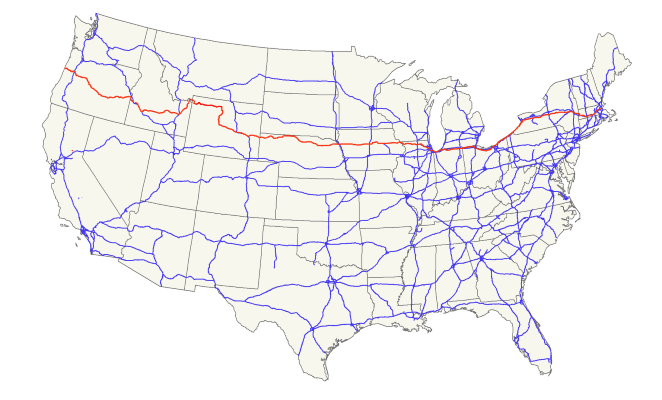 U.S. Route 20 or U.S. Highway 20 (US 20) is an east-west United States highway that stretches from the Pacific Northwest all the way to New England. The “0” in its route number indicates that US 20 is a coast-to-coast route and major route. Spanning 3,365 miles, it is the longest road in the United States, and the route is roughly parallel to that of the newer Interstate 90 (I-90), which is, in turn, the longest Interstate Highway in the U.S.

There is a discontinuity in the official designation of US 20 through Yellowstone National Park, with unnumbered roads used to traverse the park.

US 20 and US 30 break the general U.S. Route numbering rules in Oregon, since US 30 actually starts north of US 20 in Astoria, and runs parallel to the north throughout the state (the Columbia River and Interstate 84). The two-run concurrently and continue in the correct positioning near Caldwell, Idaho. This is because US 20 was not a planned coast-to-coast route while US 30 was. US 20 originally ended at the eastern entrance of Yellowstone Park; it was extended in 1940.

We’re a semi-truck financing and equipment financing company located in Roseville, CA. We specialize in commercial trucking and heavy equipment. With 20+ years of being in the commercial vehicle and equipment industry. Client satisfaction is our top priority at TopMark Funding®.

Our mission is to become your long-term financial partner by helping you grow your business and fleet. We’re not here for the short-term, we’re on long-haul with you. We achieve this by being your funding advisor, guiding you towards the best financial decisions for your trucking business.

If you’re in the market for a new or used semi-truck, a commercial vehicle we can help finance it for you. We have great rates, low down payments, and flexible monthly payments. We have lease and loan options for several different types of vehicles and trailers. Fill out the contact form or give us a call at (866) 627-6644. One of our finance specialists will contact you as soon as possible to go over your truck financing needs and learn more about you and your business goals.

Get a free no-obligation truck financing quote. No hard inquiries or negative impact on your credit.

Trustpilot
Post Views: 14,213
What is a Semi Truck? How Much Do Truck Drivers Make?